A week after the women’s competition ended with Rocasa Gran Canaria winning an exciting all-Spanish final, the men are ready for the conclusion of their European Cup 2021/22 season as the first leg of the Norwegian-Romanian final between Nærbø IL and CS Minaur Baia Mare is scheduled for Saturday in Stavanger.

Both teams will strive for a favourable result ahead of the decisive return leg in Baia Mare on Saturday 28 May. 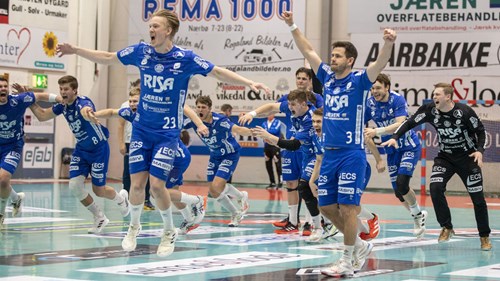 While Baia Mare have a lot of experience in European club competitions and even competed in the continental top-flight in 2015/16, newcomers Nærbø have turned their debut international season into an historic one. The team from a 7,000-inhabitant village in South-West Norway has made it all the way to the EHF European Cup Men final, and is heading to the 5,000-seater DNB Arena nearby Stavanger for the home leg in order to accommodate more spectators.

The Nordic team are yet to win any domestic titles in Norway, but are now on the brink of their maiden European triumph. And while Baia Mare will be regarded by many as the favourites to lift the trophy next week, Nærbø will give it their all to finish their fairy-tale run in the competition on a happy end.

Next Article Barça reach Cologne for the 10th time

NEWS: Footage of both duels between Nærbø and Baia Mare to be broadcast throughout Europe – and beyond

NEWS: The title will be decided in Romania on the weekend of 28/29 May

FINAL PREVIEW: The Romanian side chase a four-goal deficit against the debutants from Norway in the second leg on Saturday

FEATURE: Coach Heine Jensen, who led Nærbø to the EHF European Cup final in their debut European season, did not imagine such a success

SEMI-FINAL PREVIEW: Baia Mare and Drammen want to reach the final, but Alingsås and Nærbø are not planning to throw in the towel

SEMI-FINAL REVIEW: The homes sides were victorious in the first leg encounters, but their rivals will hope for a strong comeback next weeken…

FEATURE: A lifetime spent at Baia Mare could be the key for Calin Cabuț when CS Minaur host Nærbø in the second leg of the EHF European Cup…

FINAL REVIEW: Cousins Tord and Andreas Haugseng score more than half of Nærbø's goals as Norwegian team build a four-goal advantage in Stava…