As we wrap up our coverage for tonight, we'll leave you with the moment of glory for Rincon Fertilidad Malaga as their lift their first major trophy. What a moment!

And that was just the first European trophy lifted this season, we have another five to come with the European League Women next up tomorrow in Baia Mare. Be sure to follow that and thank you for following the action today, goodnight!

We knew it would be more difficult than the first leg but we made it through.
When I saw the score after 60 minutes, I thought, oh my God and now we are really, really happy.
Zagreb stayed really close and we lost some important balls but at the final whistle, we made it.
Virginia Fernandez
Malaga goalkeeper

Here's the moment they all waited for. A 10-game journey in the European Cup which took them to Austria, Greece and an all-Spanish semi-final and finally to Croatia tonight.

What a result for a club in only their third European season.

Congratulations to Malaga on their first European title after being pushed all the way by Zagreb over 120 minutes of handball. A thrilling back and forth encounter tonight looked like it was going either way at various points but the Spanish club stayed cool at the business end of the clash and deservedly come away with the title.

Mercedes Castellanos is winning this goalkeeper battle by a country mile, despite Malaga trailing in this second leg. It just goes to show how many opportunities Zagreb have squandered tonight!

It's all about family tonight as the Posavec and Kalaus twins have combined for 19 of their 25 goals so far. As it stands, it's not enough, however, as Malaga, with their own López Jiménez twins, lead by a single goal on aggregate with 12 minutes remaining.

The tension is not subsiding here in Zagreb with the two contenders trading blow for blow and goal for goal in the opening 9 minutes of the second half.

Malaga have their noses just out in front, trailing 21:18 on the night. 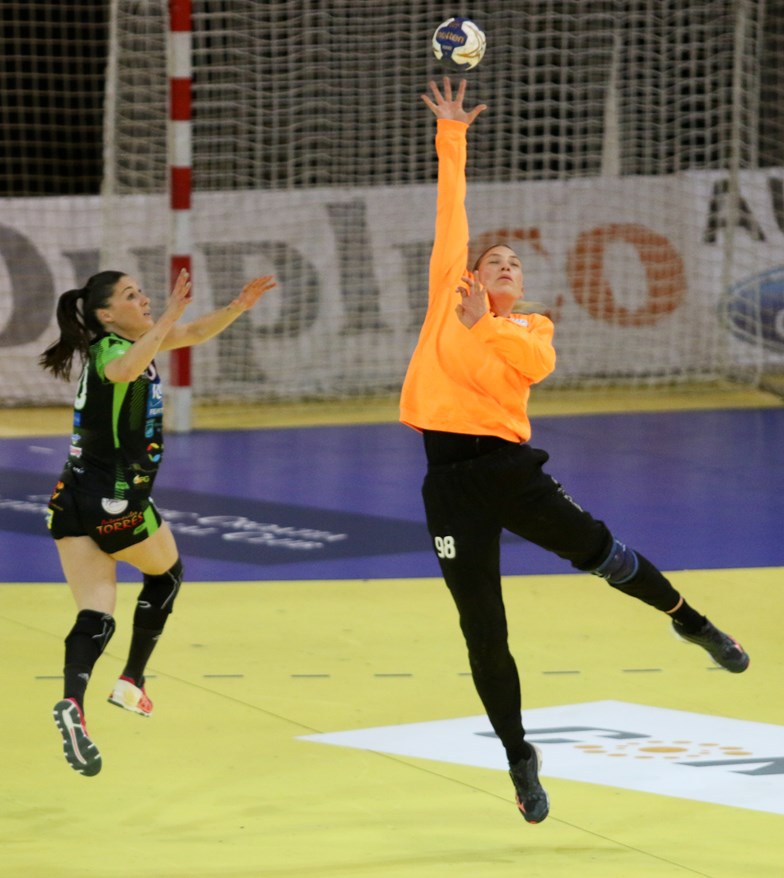 Here's what EHF journalist Danijela Lemaic, who is on-site in Zagreb, has to say about the first half.

"Both teams are playing strong defense and Lokomotiva is not giving up. With a save from Lucija Besen they took over the lead midway first half.

"The Spanish team was most effective from left wing Soledad López and ‘Lokosice’ were fighting back with counter-attacks.

"Lokomotiva’s coach Sostaric was nervous at the beginning but lead has calm him down, while the Spanish bench is quite loud, supporting their teammates who will try to catch their opponents, who are leading by the magic number four at half-time."

Oh, the ebbs and flows of this final! It looked like Zagreb were fully in control heading into half-time, leading 17:11, but a late 3:0 run for Malaga, including two from López of course, leaves us level on aggregate at the break.

It's all-square on aggregate and it could have been better for Zagreb as they clip the crossbar from a wing shot. Half-time cannot come quickly enough for the guests. 15:11 after 26 minutes!

Zagreb are catching Malaga with the counter-attacks and it's hurting!

Unperturbed by her suspensions, Posavec remains in defence and barrels through on a break to give her side a 12:9 lead on the night, forcing Malaga's first timeout after 19 as their aggregate lead hangs by a thread.

Stela Posavec has been heavily involved in the opening quarter, for better and for worse. The Zagreb playmaker has scored two nice goals but has also been suspended twice, putting her in serious foul trouble with a long way left to go! It's 8:8 after 15 minutes after López scores again!

Soledad López has enjoyed an outstanding start to the game on the left wing, scoring Malaga's first four goals of the evening. Her teammate Estela Doiro has since gotten in on the act and it's definitely needed in this tight opening 8 minutes with the score at 5:5.

Malaga's four-goal advantage from the first leg is such a tricky one to judge, a fairly big margin from the chasing team's perspective, yet not big enough for the team with the lead.

You can see that Zagreb were trying to push the pace and steal into an early lead but Malaga catch them on the break and make it 2:0.

Some great shots coming in from Zagreb and you've gotta love the customised masks from Malaga!

We're just about ready to go and you can already tune in to the live stream on EHFTV.

We spoke to Zagreb's standout player Larissa Kalaus ahead of the match as she and a number of the Zagreb players look to complete a remarkable season with a title.

Kalaus was in the Croatia side to claim an astonishing bronze medal at EHF EURO 2020 last December.

“When I look back on this season, it was unbelievable. Despite all obstacles and hard conditions due to the global pandemic, we managed to surprise everyone,” Kalaus said. “Nobody believed in us and we pulled off the biggest surprise with Croatia, something we didn’t believe, either.”

Larissa Kalaus: “We will give our last drop of sweat on the…

FEATURE: The left back is confident Zagreb can beat Malaga in the second leg of the European Cup final Saturday

Good evening handball fans and welcome to the live blog as we crown the first European club competition winners of the 2020/21 season!

It's the second leg of the European Cup Women, the third-tier competition, where we have HC Lokomotiva Zagreb and Rincon Fertilidad Malaga battling for the title.

Here is what happened in the first leg last week!

Draw determines 42 pairings in rounds 1 and 2

DRAW REVIEW: The 50 teams starting in the opening qualification round in October have learned their opponents in Tuesday's draw

212 balls set to be opened in big draw event

NEWS: Draws for four European club competitions will take place in Vienna on Tuesday at 11:00 CEST

NEWS: Draw for rounds 1 and 2 will take place on 20 July; first matches in September

NEWS: 57 teams have registered for the EHF’s third-tier club handball competition; finals scheduled for May 2022

Larissa Kalaus: “We will give our last drop of sweat on the…

FEATURE: The left back is confident Zagreb can beat Malaga in the second leg of the European Cup final Saturday

Zagreb to play catch-up with Malaga in final

FINAL PREVIEW: The Croatian side start the decisive leg of the EHF European Cup final Saturday with a four-goal deficit

The season is over, what is next?

NEWS: Details of the key dates leading up to the start of the 2021/22 season