Following the completion of the EHF EURO 2022 qualifiers on Sunday, the lineup for the final tournament in Hungary and Slovakia is complete – and the next step is for the 24 teams to learn their preliminary round opponents.

The teams will not have to wait long, as the draw that will determine the six preliminary round groups is set to take place on Thursday 6 May at 17:00 CEST. The draw will be held in Budapest, where the EHF EURO 2022 final will be played on 30 January.

20 of the teams made their way to the final tournament through the extensive qualification stage, which saw the two top-ranked teams in each of the eight playing groups clinch berths at the final tournament, along with the four best third-ranked teams. Hungary and Slovakia were directly qualified as co-hosts, while Spain and Croatia secured their places as finalists at the 2020 edition won by Spain.

For the draw, the 24 teams have been divided into four pots of six squads. The seeding for the pots is based on ranking at the EHF EURO 2020, updated with consideration for ranking in the qualifier groups.

The pots are as follows:

Six teams have already been allocated their group (and row, according to pot), with EHF EURO 2020 semi-finalists Slovenia set to play in group A in Debrecen; co-hosts Hungary to start in group B in Budapest; EHF EURO 2020 runners-up Croatia to begin in group C in Szeged; Germany in group D in Bratislava; Czech Republic in group E, also in Bratislava; and co-hosts Slovakia in group F in Kosice. 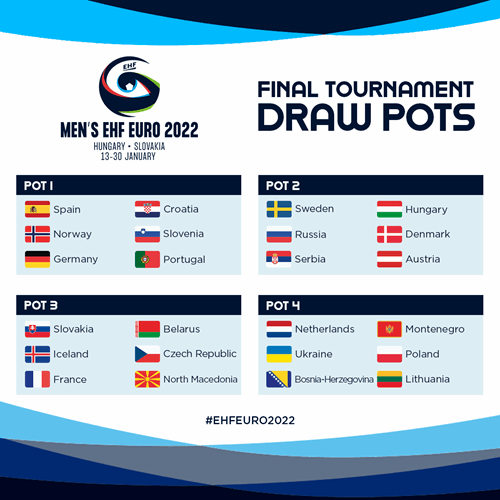 EHF EURO 2022 tickets now on sale for Szeged and Debrecen

MEDIA RELEASE: Plenty of top-class matches can be expected in the opening stages of the Men’s EHF EURO 2022

NEWS: The 24 teams contesting the Men’s EHF EURO 2022 learned their opponents when the draw was held on Thursday in Budapest

SUMMARY: The draw for the Men's EHF EURO 2022 took place in Budapest on Thursday, with the 24 teams learning their preliminary round opponen…

NEWS: A mischievous deer is the official mascot of the Men’s EHF EURO 2022 and fans can vote for his name now

TALKING POINTS: The EHF EURO 2022 qualifiers delivered plenty of drama — and there is plenty to talk about

GROUP 8 REVIEW: While Sweden took a convincing 39:16 win against Kosovo, Montenegro overcame Romania in the group's pivotal match to qualify…