Former champions Skövde and Minsk to meet in Last 16

The battle for quarter-final berths is really on in the EHF European Cup Men 2021/22 since the eight pairings for the Last 16 have been drawn in Vienna on Tuesday.

The 16 remaining clubs now know who they will have to beat when play resumes in February 2022. 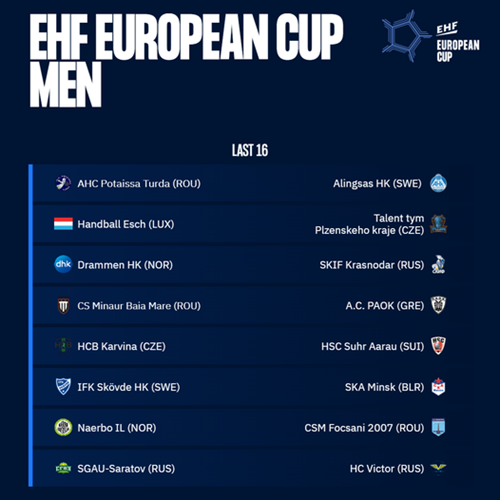 One of the standout ties includes IFK Skövde HK and SKA Minsk, both former winners of the Challenge Cup, which was replaced by the European Cup as Europe’s third-tier club competition in 2020.

The Swedish side lifted the trophy in 2004 and will start at home against the 2013 winners from Belarus.

Clubs from only nine different countries are still in the race for the trophy, with Russia and Romania leading the way with three participants each.

No country-protection rule applied to the draw, enabling a national derby to appear on the Last 16 playing schedule, as Russian sides SGAU-Saratov and HC Victor are set to lock horns twice in February.

The first leg of the Last 16 takes place on 12/13 February 2022, followed by the decisive second leg one week later.

Previous Article This is Me: Hampus Wanne

Romanian sides bounce back at home

ROUND REVIEW: The line-up for the Last 16 of the EHF European Cup Men is complete following 16 matches played this weekend

Battle for Last 16 goes to the wire

ROUND PREVIEW: Many ties in the EHF European Cup Men round 3 are still wide open ahead of the decisive leg this weekend

PAOK and Skövde to host doubleheaders

ROUND PREVIEW: Two teams will earn their Last 16 berth already this weekend as the competition heads into round 3

Drama through despite second-leg defeat

ROUND REVIEW: The line-up for round 3 of the EHF European Men is complete following 27 matches played over the weekend

DRAW PREVIEW: The pairings for the next two rounds of the EHF European Cup Women 2021/22 will be determined on Tuesday

ROUND REVIEW: Rocasa and Elche joined fellow Spanish side Malaga in the last eight

ROUND PREVIEW: The last five tickets to the quarter-final will be booked when the Last 16 wraps up this weekend

Malaga and Vestmannaeyjar through to quarterfinals

ROUND REVIEW: Costa del Sol Malaga and IBV Vestmannaeyjar secured their progression from the Round of 16.