This story has been updated on Friday (14 January) with the cancellation of the second-leg between HK Galychanka Lviv and SSV Brixen Südtirol, and the subsequent progression of the Ukrainian side to the quarter-final.

HK Galychanka Lviv also advance, after their return leg at home against SSV Brixen Südtirol had to be canceled due to several positive Covid-19 tests within the Italian team. Lviv have been formally awarded a 10:0 win and, after they had already won the first leg 36:29, go through to the quarter-final.

The five remaining spots are set to be occupied this weekend when the Last 16 will be completed. 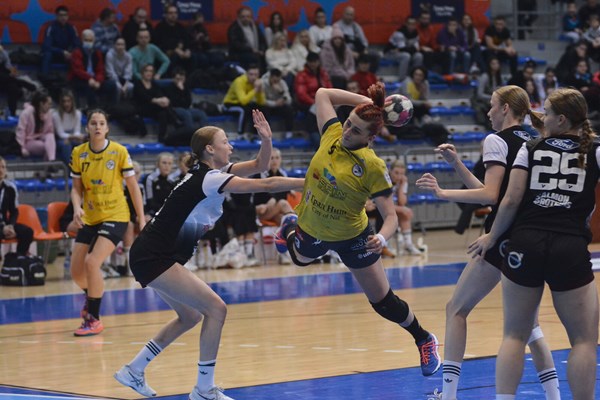 All three Spanish sides could make it to the quarter-final

Spain had the biggest number of teams – three – in the Last 16, and there is a possibility that the same is going to be the case in the quarter-final.

While Malaga are already through, two-time EHF Challenge Cup winners Rocasa will follow if they win or have a draw not higher than 27:27 against Izmir on Sunday.

The third Spanish contenders, Elche, are hosting Maccabi in a double-header, with the home advantage probably a factor that helps them go through, as well.

ROUND PREVIEW: The Spanish side need to make up for their home loss to Skara to enter the round of 16

ROUND REVIEW: nine double-headers and seven second-leg matches determined all the round 16 participants

Last 16 opens with double-headers in Iceland and Spain

ROUND PREVIEW: Two quarter-finalists will be determined in the first weekend of Last 16 action in the European Cup Women

ROUND PREVIEW: The Macedonian side face KHF Prishtina in the opening round of the EHF European Cup 2021/22

DRAW PREVIEW: The pairings for the next two rounds of the EHF European Cup Women 2021/22 will be determined on Tuesday

ROUND REVIEW: Rocasa and Elche joined fellow Spanish side Malaga in the last eight

Title-holders Malaga through to Last 16

ROUND REVIEW: Despite a defeat on Sunday, defending champions Malaga won their double-header against Quintus