Semi-final pairings to be determined in Budapest

The DELO EHF Champions League 2020/21 started with 16 teams. Only four of them are still in the race for the title: Brest Bretagne Handball, CSKA, Györi Audi ETO KC, and Vipers Kristiansand.

These four semi-finalists, who will be competing at the DELO EHF FINAL4 2021 on 29/30 May in Budapest, were confirmed in the decisive quarter-final matches last weekend.

The playing times for the DELO EHF FINAL4 2021 have not changed compared to previous editions of the marquee event in the Papp Lászlo Budapest Sportaréna:

Draw on Tuesday will determine the semi-final pairings

The DELO EHF FINAL4 2021 draw will determine who will face who in the battle for places in the trophy match in Budapest. The draw will take place in the Sport TV studio in the Hungarian capital on Tuesday 13 April at 17:30 CEST.

The draw will be streamed live on EHFTV, the EHF Champions League Facebook page and Home of Handball YouTube channel, with possible geo-blocking restrictions. TV stations across and outside Europe are broadcasting the draw live (see overview). The draw will also be covered with live tweets on the official Twitter channel, @ehfcl. 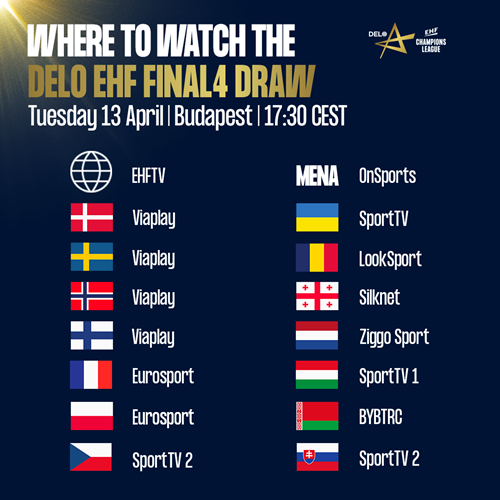 With less than seven weeks to go until the DELO EHF FINAL4 in Budapest, the four participants were confirmed with the completion of the quarter-final last weekend.

The quartet makes for an interesting blend, including two debutants (Brest and CSKA), one team competing for only the second time (Vipers), and the team that have dominated the competition in recent years (Györ).

CSKA, playing in their first EHF Champions League season, came back from a five-goal defeat in the first leg to eliminate CSM Bucuresti on away goals, 51:51.

Brest came victorious out of the all-French clash with Metz Handball, 60:50, following their decisive 10-goal win in the first leg.

Vipers also did the job in the first leg, as they defeated 2019 finalists Rostov-Don by seven goals in the first part of their double-header in Russia and maintained that difference in the second leg, 57:50.

And Györ were the only team to win both legs of the quarter-final, as they defeated Buducnost 54:40 on aggregate to book their place at the pinnacle event for their fifth participation in a total of six EHF FINAL4 events.

Countdown: Checking in on the DELO EHF FINAL4 teams

FEATURE: Anticipation is building up for the DELO EHF FINAL4 in Budapest, and the teams are gearing up with only one month to go until the f…

NEWS: A total of 30 players and coaches has now been nominated for the DELO EHF Champions League 2020/21 All-star Team

A ticket to Cologne as a farewell gift?

FEATURE: Meshkov Brest’s coach Raul Alonso is set to return to his ‘second home’ Germany, but before that, the Spaniard hopes to beat Barcel…

Mark your calendar for the quarter-finals

NEWS: All eight quarter-final ties will be played at separate times

This is me: Heidi Loke

Vote for the All-star Team presented by DELO

NEWS: It is time to have your say in the season’s All-star Team, presented by the Delo Group

NEWS: Enjoy the EHF FINAL4 Men in the comfort of your own home by taking advantage of our unique packages

This is Me: Eduarda Amorim Taleska

In her own words, five-time EHF Champions League winner Duda tells the story of her life in handball

NEWS: Media professionals can submit their requests for the final tournaments in Baia Mare, Mannheim, Budapest and Cologne.